I have a special love for red poppies, the ones growing in my sister’s early summer garden and the humble velvety-covered plastic variety that we pin to our lapels (or however else we choose to wear them) throughout Canada, the UK, Australia, and New Zealand this month of November. November: the month of remembrance.

By All Saints’ Day, when we’re reminded to honour this great communion, possibly to light a candle for a departed loved one while a fellow church member chimes a bell, out come the poppies. In the midst of the hustle-bustle and ever-maddening rush-rush of daily life, their warm red brightness gives us pause, attunes our thoughts to the eleventh hour of the eleventh day of this eleventh month when armistice came into effect in 1918: the end of the First World War. And ever since Armistice Day, Remembrance Day as we call it in Canada, hearts hold vigil both with the tragedy of war and the blessedness of life. We remember the fallen and the veterans from the Great War, and we honour all fallen soldiers and civilians, along with the suffering survivors, since 1918 to the present day. We are grateful for lives lived sacrificially; likewise, we strive to live well. 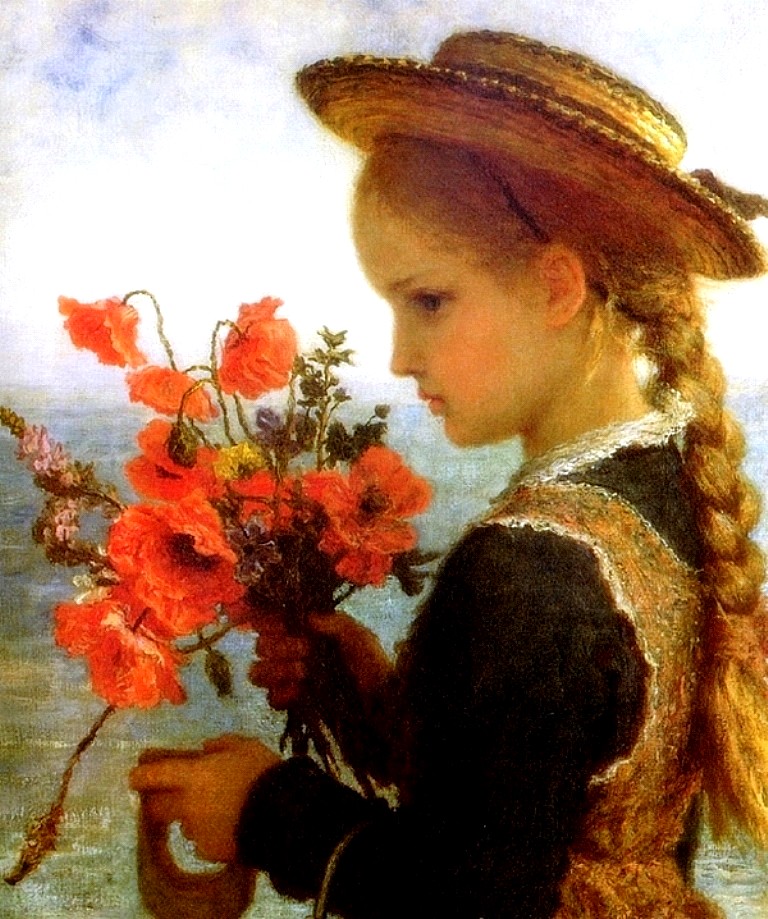 The red poppy has transcended the political lines of division that it began with; it belongs to all—a symbol of our common humanity, frail and wondrous. The poppy aids us in recalling that the year is waning and so our own lives. What are we doing, and why? What is worth remembering about the millions and millions of people in the past? How have they gifted us? Then, again, what about our own lives might be worth remembering by the young and those yet to be born?

Perhaps I especially love the red poppy because my mother’s nickname for me was Mohnblümelein (little poppy). I was born at five minutes to midnight on November 11th, Remembrance Day, so shy of November 12th that the nurses in Vancouver, B.C. who helped birth me safely into the world fretted aloud, “Poor girl, she’ll never have a birthday party.” My parents quietly disagreed, but even into the early 1960s they worried a bit about what the neighbours might think. All of these facts have encouraged me to be one who wishes to remember.

The word “remember,” according to the Oxford English Dictionary, comes from the Anglo-Norman remembrier, and it means what we all know it means: “to keep in mind, to recollect.” But here’s another thing: the call to “re-member,” to become members connected with one another once again. Imaginably, this season of poppies is also an invitation to re-member, to reunite, to become increasingly whole. We are all members of some group or other, probably several. Yet so often we are divided, perhaps sometimes acceptably, even politely, but often unnecessarily, angrily. And in this twenty-first century, our age of increasing anxiety, not only are we living in societies progressively experiencing deep division, but we are also divided within ourselves: anxious, uncertain, worried, fearful.

In this season of remembrance, shall we take a lesson or two from the red poppies we wear? The real ones, so fragile, yet so resilient that they sprang up from the bludgeoned earth of the First World War, inspired the Canadian brigade surgeon, John McCrae, to pen his famous poem, “In Flanders Fields.”

In Flanders fields the poppies blow
Between the crosses, row on row,
That mark our place; and in the sky
The larks, still bravely singing, fly
Scarce heard amid the guns below.

We are the Dead. Short days ago
We lived, felt dawn, saw sunset glow,
Loved and were loved, and now we lie,
In Flanders fields.

Take up our quarrel with the foe:
To you from failing hands we throw
The torch; be yours to hold it high.
If ye break faith with us who die
We shall not sleep, though poppies grow
In Flanders fields.

The poppies symbolize honouring the many fallen but also hope for the future, for peace. And the real ones, their green closed heads drooping downward until they are ready to bloom, unfurling their silken petals and rising on tall graceful stems, are like the human soul: fragile, sometimes forlorn, capable of atrocities, but also at times blossoming with gentle grace. Such beauty co-mingled with such horror—the red poppies remind us of both. 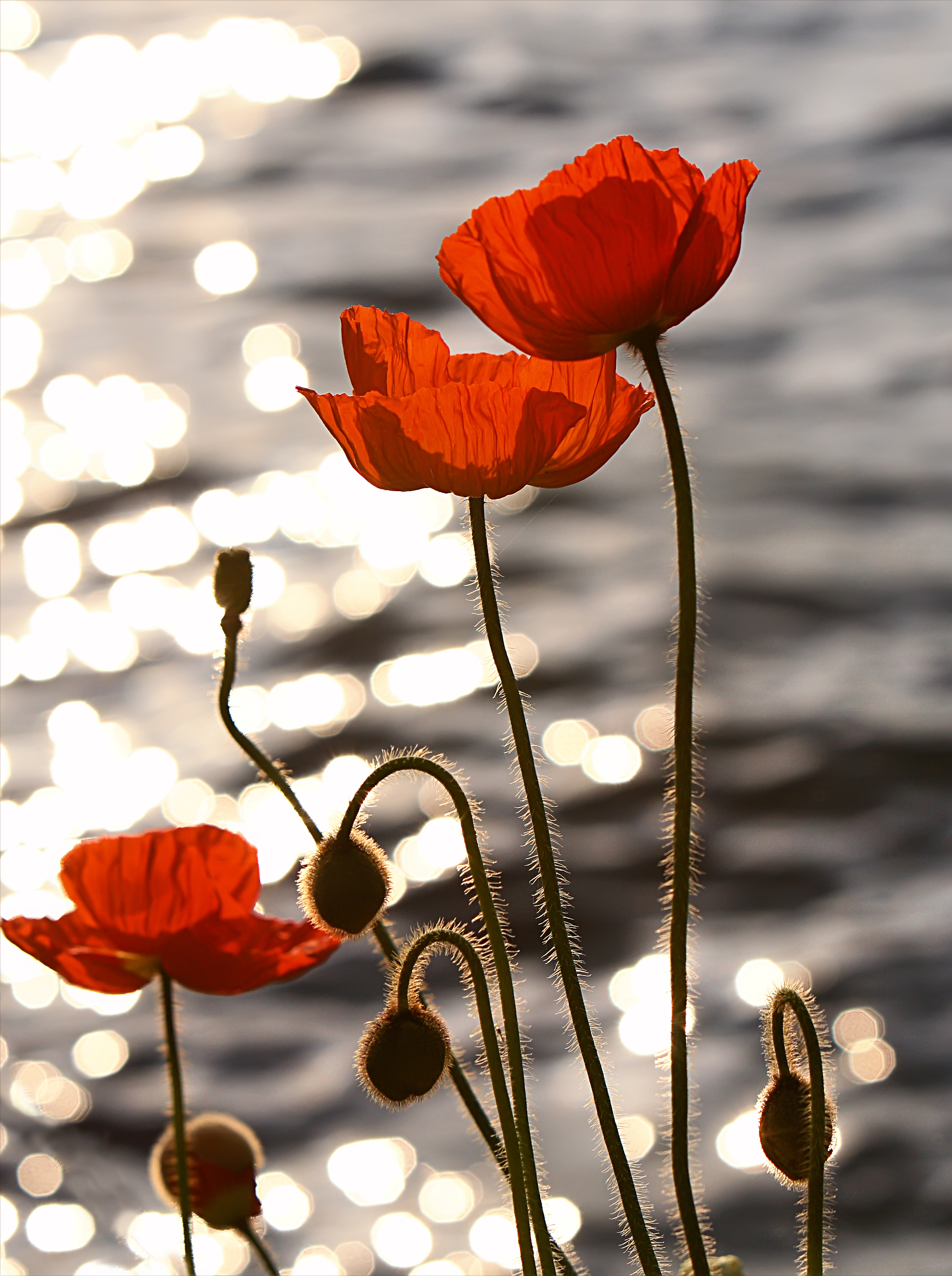 As Aleksandr Solzhenitsyn declared in Gulag Archipelago, “the line dividing good and evil cuts through the heart of every human being.” It would be so simple to separate good and evil by states, classes, and political parties, he said, but instead we need to face the truth: become willing to examine ourselves and uproot the evil within. This is a daily ongoing task. An arduous task. C.S. Lewis also spoke to this in “The Weight of Glory.” There are but two possible eternal destinations for each human soul—eternal glory or damnation—and at every moment of every day our choices move us closer to one or the other. Moreover, “All day long we are, in some degree, helping each other to one or other of these destinations.” So we need to be vigilant about how we “conduct all our dealings with one another, all friendships, all loves, all play, all politics.” The stakes can’t be higher, and like soldiers we need to be on ready alert.

In these days of quiet solemnity then as we remember the dead, we could consider the challenge to re-member, to re-collect as members of the human community. We could also welcome re-membering, re-collecting the disparate, sometimes warring aspects of our own psyches.

This past week a third generation Canadian veteran held his box of poppies for shoppers outside of Costco. It was a brilliantly sunny afternoon in this country that we both so love. When he and I exchanged a little of each other’s stories, he said, “It’s bringing tears to my eyes.”

“Yes,” this season whispers. “Yes, it’s time. It’s time for re-membering, for choosing to wish to become increasingly whole. Begin the task; let Mercy guide you. May the poppies remind you.”

4 thoughts on “A Time for Remembering”